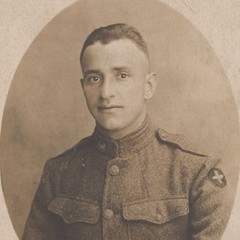 Top Posters In This Topic

Here is my first post and I figured I would put up some photos of my US WWI uniforms. I don't collect much outside of what would of actually been worn in the trenches, so my uniform collection is prob

I also picked up a nice Gas and Flame Regiment patched cotton tunic. It doesn't have any rank, but does have a honorable discharge chevron on the left sleeve, and just above it the G&F patch. At t

Here are a few more uniforms from my collection. These are pretty plain so to speak and I will highlight some of the interesting details about them.  First up is an early M1910/12 enlisted wool u